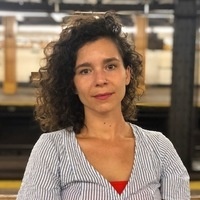 Musicologist Catherine Provenzano examines how pitch correction software Auto-Tune and Melodyne reify racial and gender stereotypes, including their development and use in US Top 40 and hip-hop music. Provenzano draws from interviews she conducted with software developers, audio engineers, music producers, and artists in Los Angeles, New York, Silicon Valley, and Germany.

This event is part of a series of Digital Alchemy Talks at Design By Cosmic, probing the intellectual and ideological histories of art and technology.

In 1998, geophysicist and flautist Dr. Andy Hildebrand seemed to have transcended the limits of the human voice. He made Auto-Tune, “a box that could make [anyone] sing in tune,” and his invention was a hit: producers prized it, studios bought it, and Auto-Tune quickly became ubiquitous in pop music production and beyond. Provenzano will give an ethnographically-grounded history of digital pitch correction technologies and the kinds of vocalities, production practices, anxieties and innovations that have bloomed, and withered, around them.