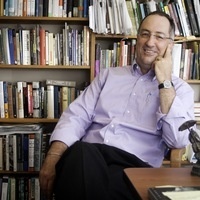 Fred Turner: “Machine Politics: The Rise of the Internet and a New Age of Authoritarianism”

In 1989, as Tim Berners-Lee dreamed up the World Wide Web, a deep faith in the democratizing power of decentralized communication ruled American life. Even Ronald Reagan, the Great Communicator of the Hollywood era, could be heard to proclaim that “The Goliath of totalitarianism will be brought down by the micro-chip.” Today of course, we know better. The question is, how did we go so far wrong? To try to answer that question, this talk returns to the 1940s and shows how our trust in decentralized communication was born in the fight against fascism during World War II. It then tracks that trust through the counterculture of the 1960s to the Silicon Valley of today. Along the way, it shows step-by-step how the twentieth-century American dream of a society of technology-equipped, expressive individuals became the foundation of today’s newly emboldened and highly individualized form of authoritarianism.