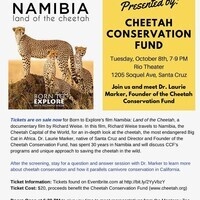 Namibia: Land of the Cheetah, Born to Explore

Born to Explore is a short documentary film by Richard Weise.  In this film, Richard travels to Namibia, the Cheetah Capital of the World, for an in-depth look at the cheetah, the most endangered Big Cat in Africa.  Dr. Laurie Marker, native of Santa Cruz and Director and Founder of the Cheetah Conservation Fund (CCF), has spent 30 years in Namibia and will discuss CCF's programs and unique approach to saving the Cheetah.