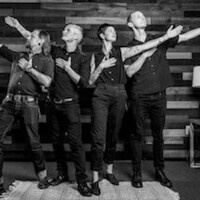 The Devil Makes Three Returns To The Catalyst

The Devil Makes Three (TDM3), whose latest album Chains Are Broken(New West Records) debuted in the Top 10 Bluegrass Charts and has spurred a successful two-year U.S. and international tour, are returning to The Catalyst on March 26.

The acclaimed bluegrass rock trio’s journey could be deemed worthy of a novel. Their self-titled 2002 debut album yielded the classic “Old Number Seven,” “Graveyard,” “The Plank,” and more as they organically attracted a diehard following through constant touring. Since then, TDM3 – which features Pete Bernhard, Cooper McBean and MorganEve Swain – has made several appearances on the Billboard Top Bluegrass charts and has received rave reviews from such press outlets as Entertainment Weekly, American Songwriter, and Paste magazine.