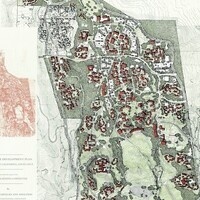 The Imagining and Making of a University Campus at Santa Cruz

Frank Zwart's article "The Making of a University Campus at Santa Cruz," published in the recently-released Santa Cruz County History Journal Number 9, titled LandScapes: Activism that Shaped Santa Cruz County, 1955-2005, described the concerted efforts of the Santa Cruz community to convince the University of California to establish a new campus here and the University's comprehensive site-selection process that led to the decision to create UC Santa Cruz. That process, and the campus's subsequent master planning effort, came at the beginning of a period of increasing environmental awareness nationwide; the University's visionary goals helped shape both the UCSC campus and the Santa Cruz community around it.

Frank's talk will summarize that sequence of events, review the primary sources that informed his article, discuss a few surprises that he uncovered along the way, and present a few things that (to his dismay) wound up on the cutting room floor.

Frank served as UCSC's campus architect from August 1988 until his retirement in April 2010. He is an alumnus of UC Santa Cruz (Cowell College, Class of 1971) and of the School of Architecture at Princeton University.