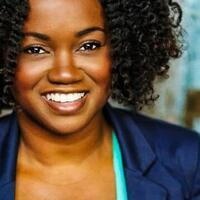 This event is presented with support from KZSC 88.1FM and is part of the Arts Division's "Arts Lectures” series.

Niketa Calame-Harris is an award-winning actress most noted as the voice of Young Nala in Disney's original animated classic The Lion King. She received her Master of Fine Arts degree from The Actors Studio Drama School in New York and her BA degree in theater from the University of California, Santa Cruz. During her time at UC Santa Cruz she was a member of AATAT, CUIP intern, CoChair of BSU, A/BSA, ESOC, Take UCSC Home, DHE chaperone. Niketa has landed roles placing her on HBO, NBC, CBS, and Lifetime. She has continued her advocacy work as a project ambassador for the American Diabetes Association where she was awarded the Points of Light Award from President George H. W. Bush.